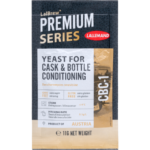 Pay over 3 EQUAL zero-interest instalments of R26.00 with PayJustNow.
Find out how...

PayJustNow allows you to pay for your purchase over 3 equal, zero interest instalments. You’ll pay one instalment at the time of purchase, the next at the beginning of the following month and the last one a month thereafter.
#zerointerest

Create your account as easily as if your eyes were shut (though we’d recommend you keep them open).

Complete your purchase and whoop for joy!

LalBrew CBC-1™ has been specifically selected from the Lallemand Yeast Culture Collection for Cask and Bottle Conditioning applications due to its high resistance to alcohol and pressure. LalBrew CBC-1™ has a neutral flavor profile and does not metabolize maltotriose, therefore the original character of the beer is preserved after refermentation. The yeast will settle and form a tight mat at the bottom of the bottle or cask. LalBrew CBC-1™ is also well suited for primary fermentation of sweeter fruit beers or full-bodied, malty ales.
LalBrew CBC-1™ is also an ideal strain for primary fermentation of dry ciders, mead, and hard-seltzer. For simple sugar fermentations with appropriate yeast nutrition, LalBrew CBC-1™ achieves high attenuation with a clean and neutral flavor profile.

Classified as a Saccharomyces cerevisiae, a top fermenting yeast.
Typical Analysis of LalBrew CBC-1™ yeast:
Percent solids  93% – 97%
Living Yeast Cells  ≥  1 x 1010 per gram of dry yeast
Wild Yeast  < 1 per 106 yeast cells
Bacteria  < 1 per 106 yeast cells
Finished product is released to the market only after passing a rigorous series of tests
*According to the ASBC and EBC methods of analysis

LalBrew CBC-1™ is a killer yeast, meaning it will secrete a toxic protein that can inhibit killer sensitive strains (most brewing strains are killer sensitive). While this is a positive yeast trait when conducting a pure fermentation/refermentation with CBC-1, extra care should be taken to ensure proper cleaning procedures are in place to avoid any cross contamination with other brews.

LalBrew CBC-1™ does not utilize the sugar maltotriose (a molecule composed of 3 glucose units), and the result will be fuller body and residual sweetness in beer. Be advised to adjust mash temperatures
according to desired result
The optimal temperature for primary fermentation with CBC-1 yeast when
producing traditional styles is 20°C(72°F)

Best used for refermentation purpose conducted preferably with priming sugars such as dextrose.
Refermentation can be completed in 2 weeks at the recommended temperatures.
The optimal temperature range for CBC-1 yeast when refermenting is 15°C(59°F) to 25°C(77°F).
CBC-1 contains an adequate reservoir of carbohydrates and unsaturated fatty acids, and cell division (typically one division) is likely to occur in the bottle.
Temperature and inoculation rate can be adapted in order to achieve desired results. If the beer is  partially carbonated, the sugar addition can be reduced.

There are no reviews yet.